The Beauty of Collaboration with Microsoft 365's 'Teams' Chat Function

As both an IT managed service provider and a busy office with team members working both in and out of the office, we utilize Microsoft Teams, a part of the Office 365 cloud suite, quite regularly. Among the features we enjoy the most is the ability to create small groups based around a task, client request, management group, and so on. If you have Office 365 and have not started using Teams let us convince you to give it a try. Here’s why.

According to a recent Forrester study called The Total Economic Impact of Microsoft Teams, the benefits are massive for employers and employees alike. Here’s the graphic breakdown of the data so you can see the perks in a snapshot. 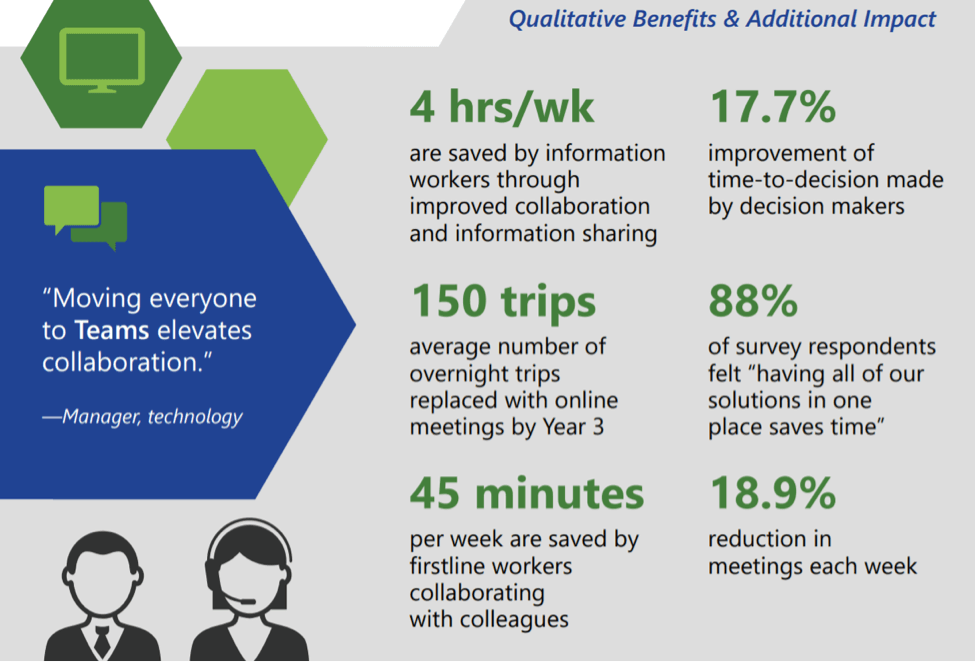 And according to Lori Wright, General Manager of Microsoft 365, “Overall, customers were pleased with Teams and how well it integrates with the rest of Office 365. They cited associated cost savings as a key factor in adopting Teams. For a standard 5,000-user organization, the study reported benefits and costs of roughly $30.3 million and $3.3 million, respectively, resulting in an overall net benefit of $27.1 million over three years.”

The key benefits of teams include a reduction in the total number of meetings and their duration. And who in the modern workforce wouldn’t be excited about that!? According to the Forrester study this equates to total time savings equal to $6.9 million. Additionally, workers save four hours per week from improved collaboration and information sharing. Meaning there is less running around, fewer emails flying back and forth, and less confusion and frustration. You get the answers you need faster. And that alone is a huge advantage. The next important point the study unveiled was that information workers saved more than one hour per week by not having to switch between applications as much. The study equated this benefit to a total savings of nearly $4.8 million. And lastly, having resources available on Teams reduces downtime by 14.6 percent. As reported by Ms. Wright, “When resources are available in one cloud-based location, downtime is reduced and complexity is lowered, making security and compliance easier. Compared to on-premises solutions, the time savings are worth $258,000 across information and Firstline Workers.”

So, if you’re new to Microsoft Office 365 or have been using it but have yet to discover Teams, now is the time to jump in and see how it works for your squad. You may be pleasantly surprised by the benefits.

Looking for help with Office 365 Migration? We can help! Request a free quote now.

Posted in: Managed IT Services